In this post I would like to illustrate how to model heat transfer through the refractory of a smelting furnace, and how to estimate the thickness of a freeze lining on the hot face. This is targeted at readers familiar with smelting furnaces, and would like to utilize measured data to evaluate the heat transfer performance, or alternatively to investigate refractory options. Although complex phenomena exists in the furnace influencing heat transfer and the formation of freeze lining which are in some cases  largely unknown, a simple approach is demonstrated to model the most important effects observed.

Refractory domain
The image below is a typical view through the smelting furnace sidewall when considering heat transfer, with the lower part of the sidewall refractory in line with the slag bath of particular interest.  In the lower part of the furnace heat is transferred from the electrodes to the slag bath, and conducted through the slag/metal baths and then refractory to where it is lost by whatever convective cooling means.

Build-up and wear of the freeze lining and refractory is driven by thermal (heat transfer), chemical (reactions), and mechanical (wear) phenomena. Should the sidewall be highly conductive and sufficient cooling provided on the shell, slag might solidify on the inside of the sidewall refractory. Increased heat conduction cools the slag close to the sidewall, causing its viscosity to increase and solidify, forming a freeze lining layer. The increased resistance will have heat transfer decrease, as well as the total heat loss from the shell. Also, chemical reactions occurring between the slag bath and freeze lining, and movement in the slag bath influences the freeze lining formation or wear. 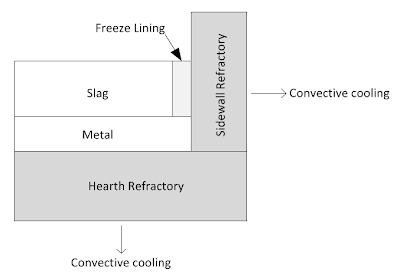 An important assumption/simplification made for this formulation is that of the hot-face temperature. In theory this is the temperature where the slag has cooled enough to ‘stick’ to the sidewall refractory and to withstand mechanical wear. This however unknown to some extent, and becomes a tuning factory in which the model is ‘tuned’ to predict more accurate results.

With the above assumptions it should be possible to model heat transfer, with the limitation that to determine the thickness of the freeze lining the heat loss through the sidewall should need to be known. This could easily be calculated however either from thermocouple data, or temperature differential and cooling water flow rate data.

The following illustrate the domain for which heat transfer will be formulated.

Considering conduction, the transient heat equation is given by the following, with k the heat transfer coefficient (W/mK), ρ the refractory density (kg/m3), and Cp the refractory heat capacity (J/kgK) .

We will only consider steady state conditions, for the heat transfer (q) in W/m2 is calculated by the following equation in differential form. In this, and equations to follow, q refers the heat transfer in the radial direction in units of W/m2, meaning the heat conducted (W) per meter squared of outer surface. The total heat loss is equal to q multiplied with the outside surface area.

The thermal resistances for conduction through each layer and convection from the shell can be calculated by the following, derived from previous equations:

Following the above, the heat transfer through the conducting refractory layers, and convection from the shell are:

Example
For example, consider a furnace with the following particulars regarding the slag, refractory layers, and sidewall cooling.

This is illustrated by the following. 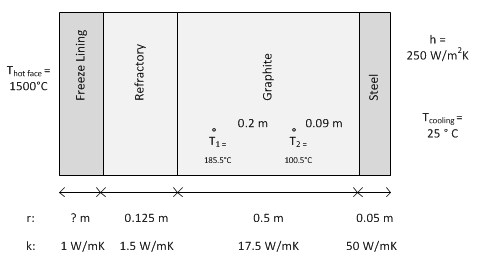 We would like to estimate the freeze lining thickness from data provided, by firstly estimating the heat  flow through the entire domain in the radial direction (from left to right). If the cooling water flow rate and temperature differential was provided this could also have been used, but in this case we will have to use the temperature difference and distance between the thermocouples in the graphite layer as follows.

In the following the thermal resistance of the freeze lining is calculated.

In the above the freeze lining thickness is estimated as being 81 mm thick. All of the calculations were made in an Excel spreadsheet, with the grey background cells marking the values being calculated.

In the above, the table towards the lower right corner depicts the distances from the front of the freeze lining and temperatures calculated using the same model used above. This is used to plot temperature versus distance from the hot face, showing the temperature distribution throughout the sidewall. In the following it can be seen how the temperature slope is steeper in areas with high thermal conductivities. 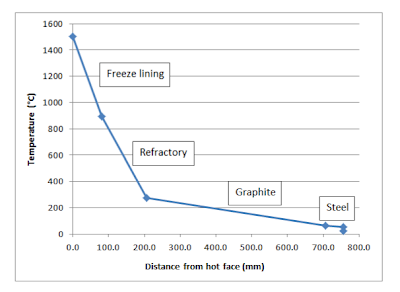 This approach was based on some assumptions and simplifications to cater for uncertain phenomena, and resulted in a model of which the parameters could be ‘tuned’ to predict results closer to observed values. The model could also be improved with thermal conductivities measured of the freeze lining by research facilities, as well as calculating more a accurate convective cooling heat transfer coefficients from cooling data.

To investigate this system in more detail, the formulation could be extended to two or three dimensions, and some phenomena included such as movement in the slag bath and slag solidification/melting. This will model the system more realistically catering for the actual phenomena observed. This formulation can be solved following a finite element approach, which is likely to be covered in a post in future.